Cooking corn on the cob in a cooler? Weird, right?!?  Well, it is actually awesome because it cooks perfectly without hardly any effort!

We recently had a big gathering with many friends and corn on the cob is sold everywhere around here with all of our local farmers and farmer’s markets.

Well, it is a lot of work to cook up tons of corn on the cob on the stove.  A few pieces work out well, but a lot is a lot of heat and back breaking, time consuming cooking!

Well, one of our friends had this idea that she had seen some where about cooking corn on the cob in a cooler.

So we put it to the test!

There was 18 full cobs or 36 half cobs in a cooler at once to be cooked.

How To Cook Perfect Corn on the Cob in a Cooler

Boil about 10-14 quarts of water on the stovetop (varies based on cooler size and amount of corn).

While the water is coming to a boil, shuck the corn and place in the cooler.  We like our’s split in half for ease in eating and smaller portions for littles.

Once the water is boiling, pour it over the corn in the cooler until the corn is fully covered.

Then close the lid and don’t open it for 30 minutes as it “cooks” in the cooler.

After 30 minutes, open it and check it to see if the center of the cob is soft and can be pierced by the cob holders or forks.  This means it is done!

If it isn’t quite done, just close the lid for a bit more time.

30 minutes was perfect for us. The corn was not over done at all, but rather just barely complete and was the crisp perfect taste that makes corn on the cob so great! 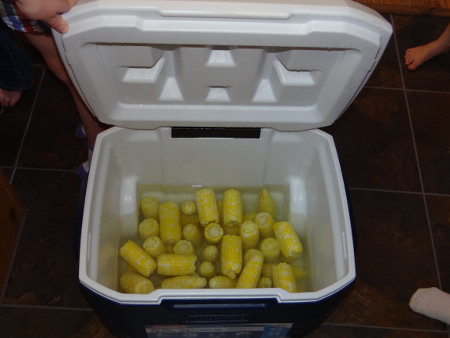 We just let our party guests use tongs and the cob holders to grab their corn.  We had a stick of butter on a butter dish with flavored salts of all kinds to “dress-it.”

It was a perfect corn party solution and a great way to feed a large crowd and it was really easy to prepare this much food! It can easily be transported too (which is what this cooler did!) from it’s original destination to the party!  The water was just poured right before leaving and perfect upon arrival!

So no matter how to plan to serve it, this might be a great solution!

What do you think of this idea?