If you have been reading our site long, you may know that I (Cassie) am not a bacon, pork, sausage fan.  I will eat it on occasion, but it isn’t something I do real often.  However, my family loves bacon and sausage for breakfast.

I do have a great option for breakfast sausage by buying the Jimmy Dean Naturals at Costco (Sam’s Club has it too) and I am able to pre-cook and brown 7 packages of sausage and freeze them for breakfast ease and affordability and the simple ingredients in this exact package fit my 2013 food goals.

Well, on the flipside, I rarely by bacon.  I am very picky about Sodium Nitrates (found in most lunchmeats, hotdogs, processed cheeses and pork products).  But there are a couple of bacon types that don’t contain them and are a more natural processing. One of them is the Hormel Naturals.  I will only buy this one and ones like this.  Yes, it is more expensive than other bacon, but that is why we increased our grocery/household/personal products budget from $75 a week in 2012 to $125 a week in 2013.  You can read all of the details on why we decided to do this for 2013 on our previous post HERE.

So I bought this bacon because it was a good price and I knew my family would be thrilled to have bacon for breakfast.

But let me be brutally honest…..I totally stink at cooking bacon!! I burn and ruin it every time.  I never mastered it and so it was another reason to kick bacon to the curb except on rare occasions because well….I couldn’t cook it!

So I got myself in a bind when I bought it and the kids saw it and wanted it for breakfast. I dreaded cooking it.  I have tried numerous ways, stovetop, grill pan, oven, microwave, etc. The best was the oven, but I still managed to burn and make a mess out of it.  I know many of you like the oven because we asked on Facebook and an overwhelming majority said that they cook it in the oven.  But the problem was that everyone was cooking it at a different temperature and different times.  I still don’t know what is the best way, temperature or time after even trying it myself a few times.

So I had used the George Foreman grill for quesadillas for lunch the previous day and it was still sitting on my counter. I thought to myself….. I wonder if I could cook the bacon in that because it is really hard to mess the food up and it cooks a bunch of the fats off!?!?

I hadn’t heard of anyone doing this and after asking on Facebook, most of you do use the oven, but a couple of you did use the Foreman Grill and loved it!

So I decided to give this a try and to my amazement…..it was easy, healthier, less messy and came out perfectly and so this is now my “go-to” bacon cooking method!

So here’s how I..someone who burns and ruins bacon every time, made a perfect batch of bacon! 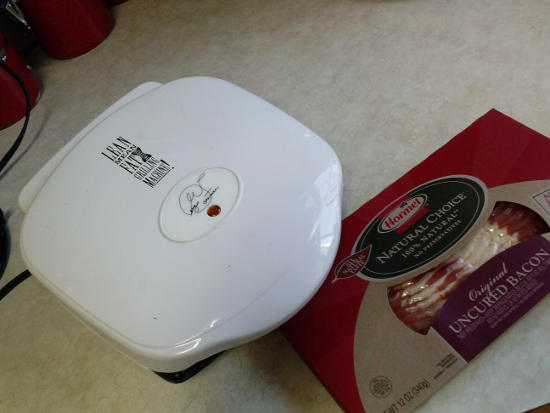 First, you just need to plug-in your grill.  You don’t have to guess on temperatures or anything, just plug it in! Then I use my kitchen scissors to cut the package of bacon in half to cook up half slices. By the way….I have four pairs of these kitchen scissors.  I use them to cut meats and chicken (even partly frozen), slices of pizza, some veggies…many, many things that you would use a knife for. They are sold at Dollar Tree for only $1 and they still sell them there and have been selling them for well over a year.  It is one of the best and most versatile kitchen tools.  I would head over to Dollar Tree and grab several pairs. They are in the kitchen tools section! Then just place your half strips on your grill and close the lid! I have a small one that we got as a wedding gift and after nearly 14 years, we still use it.  We probably should buy a bigger one now that we are a family of 7, but it works for now 🙂 If you have a bigger one, you can probably cook the whole package at once! Close the lid and cook for about 4-5 minutes until desired done-ness is reached! Then serve however you would like! On our small grill, it took 3-rounds too cook the full package.

The kids enjoyed it with scrambled eggs and toast.  I wanted to try it, but disguise it a bit more, so I made a yummy breakfast burrito on a whole wheat tortilla! So seriously…..If I can cook perfect bacon (which I thought would be two words that would never be associated with me in the same sentence) then you can too!

Also, if you don’t own a George Foreman grill yet, I would recommend it! We use it a lot for lunches of grilled cheese, quesadillas, chicken, hamburgers and now bacon!

Amazon has a bunch of them in different sizes and styles on sale right now HERE.

The one we have is this one (but in white) and it is on sale for $21 HERE with free shipping with Amazon Prime or a $25 or more order. What is your flawless method for cooking bacon?