Driving for Uber can give you the chance to pay off debt, make money on the side for a financial goal, make ends meet, save for a vacation – pretty much help you with any of your family’s financial goals.

What is Uber and how does it work?

Uber is a technology company that provides users with an alternative to taking a taxi. Riding with Uber ends up generally being much cheaper for the rider, plus it allows everyday people to use their own car to move you around. It is all done through the Uber app and is a very safe, recognized and effective alternative to taxi cab transportation.

A driver has to meet Uber’s requirements, including passing a background check. Once a driver’s activation is complete, and the driver wants to take their first trip (aka, no set schedule), he/she turns on the Uber app, and waits for someone to virtually “hail a ride.” Then they pickup the rider at the location that the app directs them to and drives them to their destination, leaving the app open the whole time to get credit for the drive and so the drive can be tracked. Uber driver-partners are paid weekly via direct deposit, or can be paid up to 5x daily via Instant Pay. 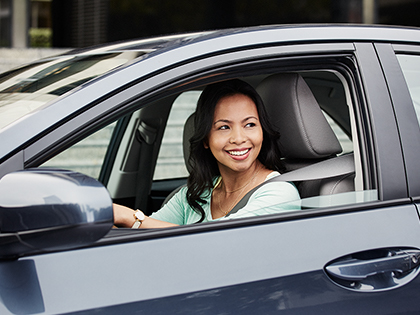 A rider that wants a potentially cheaper ride than a taxi can open the app and request a pickup through the app. They wait for the driver and can watch their progress of pickup arrival on the app. The app will tell you the driver’s name, star rating, the car and license plate, so you can’t miss him/her. Then they also keep their app open during the drive and can watch the tracking real time on their app. This is not only to log the cost, but to also keep everyone accountable and safe. The nice thing for the rider is that Uber shows you how much the ride will cost before you make the official request, so you are not left in the dark, or watching a taxi meter rack up the fees while you are in the cab. I love being able to know exactly how much it will cost. As a rider, you will also rate the quality of your experience and this goes on the driver’s record for others to view.

In the end, it’s a great way for a driver to earn extra money on the side and a cheaper way for travelers to get cheaper transportation. Yes – that’s a win for both the driver and the rider!

UPDATE: we just recently traveled to Dallas to attend a financial conference. We took an Uber to get where we needed. This driver was a college student and he said that he is averaging $30 per hour driving Uber in Dallas. He said that any college student should drive for Uber because there will not be anything else they can do on their own schedule to make $30 per hour out the gate.

What are the requirements to drive for Uber?

Uber does have requirements for driver-partners, which riders love because it ensures safety and a pleasant ride. Requirements include, but are not limited to the following:

● You must have an eligible 4-door vehicle.

● You must pass the background check

● Your vehicle must be no older than a certain age. For most states, this will be a vehicle newer than 2011. It will vary slightly with some states requiring a newer model than this. But that is the current average as of the writing of this post.

● You have to have been driving for at least 1 year (3 years if you are under 23) ● You also have to have a clean driving record.

Click HERE to find out if your car qualifies! 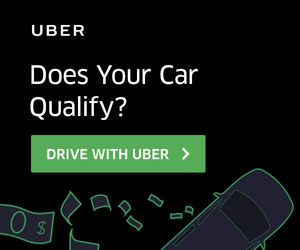 All of this may sound completely obvious but it is great to know that they do have standards
and partner with quality drivers!

Note that I say “partner,” Uber is not employing you; rather you would be an independent
contractor.

How much can you get paid? 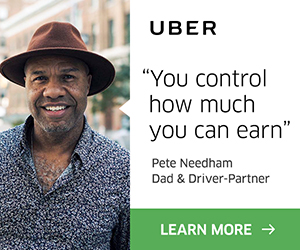 Click HERE to learn more about how much you can make

The major question is driving for Uber profitable? This is somewhat of a mysterious question merely because there are so many factors that go into the answer of this question: all rides are a different price, some drivers are busy for an entire hour while others are waiting around for a call.  Obviously part of this depends even on the location you are driving (e.g., a larger city will result in higher use of Uber than a small town).  So to give a set amount of pay is impossible.  In fact, some cities, the fares are higher while in other cities, the fares are much lower. Additionally, if there are a lot of drivers and not many riders at any given moment, the cost of a ride drops in price whereas if there are not many drivers but many riders at any given time, the cost of the rider is higher following the supply and demand concept we all learned in high school.

But from talking to a number of Uber drivers and from research, it looks like the average Uber driver makes about $15 an hour.

Let us break this down to understand a little more. We are going to base our estimates on UberX, which is the basic 4-door sedan ride.

If someone wanted to be picked up from the Long Beach Airport and driven to a hotel near Disneyland, it would be $23-$31 ride. This is about a 35 minute drive, spanning an 18-mile distance.

So for half of an hour, you will get paid $17.25 – $23.25 after Uber takes their 25% cut. In addition, now that the app prompts and allows riders to give a tip via the app (this was a huge limitation in the past), the average Uber tip being $2.50, this is calculated into your pay. So you might profit around $20 for this 18-mile,  35-minute trip. But it will likely be around an hour total in that once they “hail” a ride through the app, depending on how close you are to their pickup location, it might take you on average about 5-10 minutes to get to them to pick them up. This is driving time you are not earning anything.  Then once you arrive in the Anaheim area, you can hang around and wait for someone in the vicinity to “hail another ride” so that you can take 5-10 minutes to get to them, plus any waiting time, for about an hour total between rides. This is more of a long-distance ride. But for that average $20 or so profit, you also have to calculate the cost of gas for that 18 mile ride and the in between drives to picking passengers up. That ends up making your profit about $15 per hour.

There are many factors that play into an Uber drive as the rates vary from one city/area to another.

For example, in our big city downtown, I estimated a trip from a downtown hotel to the city zoo, which is 5.3 miles away. Uber estimated my ride would be between $8-$12 and an 18 minute ride. A driver would receive between $6 and $9 plus a tip of about $2-$3. It will probably take an uber driver 30 minutes total, calculating the before pickup driving time and the waiting for the next ride. So shorter routes can often mean more per hour, if there are lots of pickups available. If not, a longer ride might be more profitable.

The way that Uber charges for drives is first a flat fee, which varies from $1-$3 based on the city and location, plus a fee for time and a fee for distance (like $0.25 each minute and mile as an example, but varies by location). So at the time a rider requests a ride, the rider gets the estimated cost before hand, and the driver can choose to pickup a rider based on the amount they will get paid for that ride.

We watched a video on YouTube of an Uber driver who drives more than full-time (79 hours) and made an average of $13.83 per hour after all of his expenses. BUT….he chose to rent a car each week at $240 a week, instead of using his own. This seems very silly to us, because you can use your own car (if it meets the requirements) and make an extra $1,000 a month! Then his average pay would have been $18.89 per hour average after expenses. I don’t know why he chooses to rent a car, but we know many good reasons to use your own car.  He is calculating insurance as part of his expenses, but you should have insurance on your car regardless, so this really isn’t an extra expense. Uber provides insurance for their drivers for the added risks.

For example, Uber provides insurance coverage from the time you accept a request, even before you pick them up (that time when it takes you 5-10 minutes to reach the rider) until the rider exits your vehicle. They also provide cleaning services for your vehicle if a rider soils your vehicle (like throwing up). They also provide coverage to fix any damage to your vehicle from a rider.  If a rider does sustain an injury, Uber carries a $1 million bodily harm insurance for you. You are required to have the normal insurance that you should have whether you are driving or not, but you don’t need extra insurance as they are all provided by Uber.

The tax deductions are a big plus too. As stated above, you will be an independent contractor and will receive a 1099 from Uber if you make over $600 per year. This means that you get more tax deductions than if you were an actual employee. You will be able to ride off things like:

In the end, you could do well, probably plan on at least $15 per hour. But this is really going to be more of a side hustle for most people as it would be difficult to maintain a full 8+ hours a day of steady driving.

If you worked 4 hours per week at $15 per hour (very attainable for students or even full time employees on nights and weekends), this is $60 per week more or $240 extra per month! Not a bad side hustle at all!  We believe that $15 per hour is quite a conservative amount, but we like to play it safe. 🙂

Why drive for Uber?

So why would YOU want to drive for Uber?

Pros of Driving for Uber

Cons of Driving for Uber

What we recommend you do now

Just sign-up and apply to be a driver. You can drive wherever, whenever you want for as long or as little as you want, pending conditional hourly restrictions. We even met a driver who picked us up once. We asked him how often he drove. He said that he just turns it on (the app that waits for a pickup) whenever he has a couple of hours to kill and it has worked well for him to redeem his time and make some good money on the side.

In the end, it never hurts to have an opportunity to earn extra literally knocking at your “car” door. Apply to drive and use it when you want and when you need it!

It really is one of the easiest, less committed ways to make money on the side.

We want to hear from you. We had talked to and interviewed many people for this article, but we know there are so many thoughts and experiences out there. We would love to hear from you either as a driver or as a rider.

Previous Post: « Farm Fresh Ground Turkey Only $1.71 per lb. Until 10/24
Next Post: Less Than Three Days Left: Have You Claimed Your FREE Workbook Yet? »